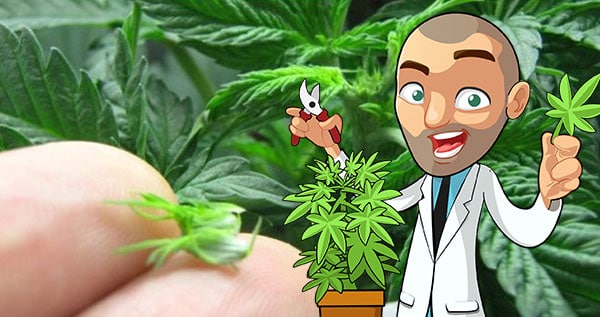 There are many factors that play a role in the cannabis yields, and a few of them are the types of plants and their pruning methods. Some of the most common practices that are used include pruning at the beginning of a plant’s life, and topping at the end of a plant’s life. Both of these practices are a great way to ensure that your crops will produce the highest yields possible. However, it is important to note that they are not necessarily the only ways to prune your crop. It is also a good idea to consult a certified grower to learn how to prune your crops to achieve the best results.

There are many factors to consider when pruning cannabis yields. Some of these include the quality of your genetics and whether or not you want to stress your plant. If you are unsure, you may want to ask an expert for advice.

Two common methods are fimming and topping. While the first is a more simple, albeit complicated, method, the second is far more stressful to the plant.

Fimming is a simple, yet highly effective technique. This is because it removes a lot of unwanted leaves and new growth from the top of the plant without damaging the main stem. The resulting plant is bushier and taller.

Typically, the best results are obtained by performing fimming in the vegetative phase. However, this is not always the case. You might want to consider fimming if your plant is very young. Also, if your plant is going through a rapid growth phase, it is more likely to benefit from this method.

Aside from being a less stressor on the plant, fimming is also more efficient. It produces four or more colas, as opposed to just one in a single cut.

Unlike topping, fimming only works with plants in the vegetative stage. This allows you to use the extra plant matter for other purposes.

One of the most important aspects of the process is timing. If you perform fimming too early, your plant will be stunted. Similarly, if you perform topping too late, you risk damaging the plant.

Topping is a more reliable method for maximizing your crop’s yield. Many commercial growers implement this technique. In addition, some cultivators prefer the comfort of topping over the rigors of fimming.

Whether you choose topping or fimming, you should give your plant plenty of light and water. It should also be allowed to rest for at least a couple of weeks. By doing so, the plant will recover faster and the buds will be healthier.

Both fimming and topping have their merits. Whether you choose to try them out or stick with the tried and true method is entirely up to you.

Cannabis yields vary greatly depending on the variety and production method used. Pruning can be a useful technique to increase your yield. While there are various types of pruning, there are two main methods: trimming and topping.

Trimming is a way to remove dead leaves and damaged growth. This allows the plant to focus its energy on quality buds. It also improves aesthetics and aroma. A good pair of shears is ideal for this task.

Generally, pruning can be performed throughout the vegetative phase of a plant. However, it’s best to avoid it during flowering. During this phase, a plant’s growth will be limited and you’ll be removing leaves that won’t provide much use to the plant. In addition, if you prune too aggressively, you can destroy your plant.

Topping is another way to manipulate the cannabis plant. By removing lower growth, you can create more bud sites on the branches. You can top the plant several times during its life, which increases its yields.

Although the effects of different pruning techniques on cannabis yields have not been studied, the light quality of the plant has been researched. Light type has a significant impact on CBD and flower yields.

Several studies have been conducted on the effect of fluorescent lighting on marigold and salvia plants. Fluorescent lighting increased the number of visible flower buds. These plants produced more cannabinoid yields under these conditions.

Depending on the type of cultivator, a plant will be topped a few times during its lifetime. Most growers will top their plants around week three of flowering.

The effects of different pruning methods on cannabis yields are a topic of interest for both growers and scientists. Using the correct technique can increase the number of leaves in the plant, thereby increasing photosynthesis and chlorophyll levels. Increasing the number of leaves in a plant can also promote healthier growth. This increases the potential of a bigger harvest.

Pruning the cannabis plant is not always easy, but it is an effective way of maximizing its growth and efficiency. A well pruned plant will not spend its energy on unnecessary branches, and will focus on healthy buds.

Studies on the effects of light on flowering have been conducted for a variety of plants, including salvia and marigold. Fluorescent lights have been found to increase the number of visible flower buds. However, it is not known if these effects are beneficial in marijuana production.

Studies have suggested that different pruning methods may produce better results. A well pruned plant will not expend energy on unproductive growth, thereby encouraging the creation of more dense buds.

In addition to enhancing plant growth, pruning can reduce the number of flower buds and improve airflow. However, it can also result in lower yields.

As with most pruning techniques, it is best to choose a method that is appropriate for the growing situation. Using the wrong method, such as heavy pruning, could actually hinder the plant’s growth and produce smaller, less dense buds. Choosing the right method depends on your growing environment, your experience level, and your goals.

Pruning is something that most people instinctively do. If you are new to growing cannabis, however, it is best to wait until you have some experience.

Cannabis yields are dependent on a number of factors. The type of cultivar, the nutrient concentration, and production methods all play a role. However, it is difficult to determine the exact effects of different pruning methods.

In addition, it is also important to understand that different varieties respond differently to production conditions. As a result, future studies will need to include a wider range of cannabis varieties and growth stages.

Pruning can also be used to encourage dense buds. There are several different types of pruning, including hard pinching, apical pruning, and topping.

Topping is one of the most commonly known pruning methods. The procedure involves cutting the top portion of the main stem. Topping is especially effective on strong plants. Moreover, it increases yields.

Another method is super-cropping. Super-cropping is a pruning technique that encourages branching in cannabis plants. By removing branches that won’t receive sufficient light, the plant will focus its resources on developing quality buds.

In addition to increasing airflow, it can help reduce fungal attacks in the main flowering area. It also decreases the risk of pest infestation.

It is important to note that a plant’s density is an important factor when determining its yield. A massive plant is more likely to harbor pests, and it is also inefficient to maintain.

However, the relationship between cannabis flower yields and cannabinoid yields isn’t clear. Other factors, such as lighting regimes, can also have an impact on yields.

Before choosing a pruning technique, growers should also consider their comfort level. If pruning is too hard, it can prevent a plant from flowering. Also, a heavy pruning will decrease overall plant size.

As a rule of thumb, it is best to try several different pruning techniques until you find one that works for you.