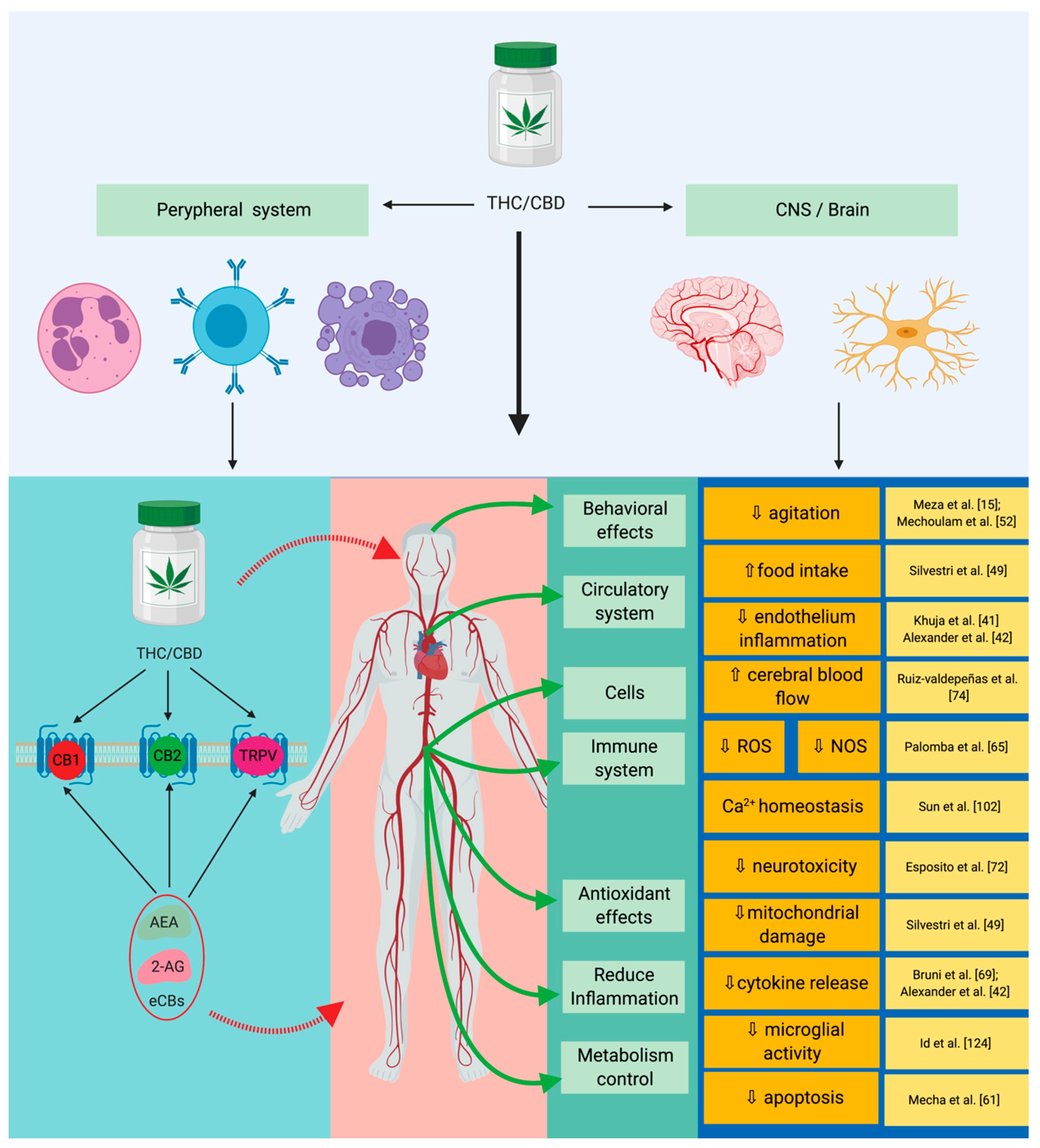 The impact of cannabis on the endocannabinoid system and immune cell trafficking is a matter of debate. However, some studies have demonstrated that heavy use of this psychoactive substance may have adverse effects on the body.

A few surveys have shown that marijuana use is widespread in some parts of the world. These include surveys of people whose jobs require them to drive and surveys of motor vehicle collision victims. Cannabis use has also been noted in surveys of homicide victims and trauma patients.

One study found that heavy users of cannabis (consumers who smoke five or more joints per day) were at increased risk of developing respiratory diseases. Smoked cannabis has been known to impair the alveolar macrophages, the first line of defence in the lungs.

A few studies have suggested that the use of cannabis during pregnancy may lead to low birth weight babies. Furthermore, it may also increase the risk of cancer in later life. Although these findings are intriguing, they need to be replicated.

Similarly, it has been noted that repeated administration of cannabinoids may lead to desensitization. This is because the receptors responsible for cannabis’s alleged medicinal properties are downregulated by the substance.

The endocannabinoid system (ECS) and insulin sensitivity in type 2 diabetes are influenced by cannabis. Although the relationship between cannabis and diabetes is still not fully understood, scientists are exploring the effects of cannabinoids.

See also  What Type of Cannabis Strain is Snoop Dogg?

The EC system participates in controlling the body’s energy homeostasis. Cannabinoids such as delta-9 tetrahydrocannabivarin (THCV) have shown antidiabetic properties. They are a promising new agent for treating type 2 diabetes.

Hyperglycaemia is believed to trigger perturbations in the ECS. These changes may be reflected in increased gluconeogenesis and glycogenolysis.

It is possible that the effects of cannabinoids on the endocannabinoid system in the liver, skeletal muscle and heart are related to oxidative stress. This may have a significant effect on the development of chronic diseases.

In addition, there is evidence that cannabinoid receptors increase insulin resistance and insulin sensitivity in some people. However, this does not mean that marijuana can cure diabetes. If you are diabetic and decide to try marijuana, consult with your health care provider. He or she can help you plan for cannabis use and identify patterns in your blood sugar.

If you decide to use cannabis, write down your insulin dose, fasting blood sugar, and food intake. It is also a good idea to have glucagon on hand in case you need to treat low blood sugar.

You should always be careful when you are using cannabis and should be aware of your surroundings. Marijuana can make high blood sugar feel more intense. Be sure to follow the directions on the label of any edibles that you buy from a dispensary.

The endocannabinoid system plays an important role in migraine mitigation. Researchers have identified several molecules linked to this system as potential therapeutic targets. However, more research is needed to determine the optimal dosage and formulation of cannabis and cannabinoids for migraine patients.

One of the most important molecules in the endocannabinoid system is anandamide. This neurotransmitter is found in the brain and peripheral tissues, and is essential for the maintenance of homeostasis. Studies have shown that anandamide may be reduced in migraine sufferers.

Endocannabinoids also regulate the synthesis and activity of IL2, which is a fundamental cytokine that is involved in T-cell activities. By blocking the release of IL2, the CB1 and CB2 receptors are engaged, which leads to an inhibition of the T-cell’s inflammatory response.

See also  The Impact of Cannabis on Skin Health

Another promising mechanism is the inhibition of the release of platelet serotonin. When the platelet’s serotonin levels are low, people experience increased sensitivity to pain and nausea.

Studies have shown that cannabinoids are effective for the treatment of pain. These include analgesic effects, decreased nociperception, and inhibition of the peripheral vasoconstrictor effect. In addition, they may have anti-inflammatory effects.

An endocannabinoid deficiency in the brain may also be a factor in the pathophysiology of migraine headaches. However, there are not many studies to support this hypothesis.

Currently, there is little evidence that cannabis is a viable migraine treatment. While anecdotal evidence and preliminary investigations suggest that it might be, a larger study is required to prove this.

Some studies have reported that THC + CBD can be an effective treatment for acute attacks. But the results were mixed. They were positive for some studies, but not all. There is also a lack of control studies.

Fibromyalgia is a condition characterized by widespread, chronic pain. This type of pain is typically managed by prescription drugs, which may have unpleasant side effects such as internal bleeding. In some cases, alternative analgesics can provide better relief. Medical cannabis may be an effective treatment for the symptoms of fibromyalgia. However, the safety of cannabinoids, as well as their effectiveness, remain unclear.

The endocannabinoid system, which is found in the human body, may play a role in the onset and management of fibromyalgia. Research has revealed that the cannabinoid receptors interact with different pain targets in the human body. Although the relationship between these two systems remains enigmatic, some studies suggest that cannabinoids have an analgesic effect in FM patients.

Until more research is conducted, we cannot be confident in the safety and efficacy of cannabinoids for pain management. There are also questions about tolerability and the safety of their administration.

Before using medical cannabis, it is recommended that you talk to your doctor. He or she can tell you whether the cannabis is legal where you live. They may also be able to help you weigh the risks and benefits of using it.

See also  The Effects of Cannabis on the Liver

Studies on the efficacy of cannabinoids need to be designed with an appropriate methodological framework. Gender should be controlled for and comorbidities should be considered. Otherwise, results are likely to be inconsistent and inconclusive. Ultimately, more clinical trials are needed to determine the effectiveness and safety of medical cannabis as a treatment for fibromyalgia.

The endocannabinoid system is a set of biosynthetic enzymes, endogenous ligands and receptors that control inflammatory responses. Cannabinoid extracts have been shown to reduce inflammation in joints, and neurogenic inflammation. In addition, they have been reported to have a broad range of immunosuppressive properties.

The endocannabinoid-induced reduction in leukocyte trafficking was abolished by the GPR55 receptor antagonist O-1918. However, this study did not demonstrate any changes in the production of TNF-a, IFN-g or miR-29b. Therefore, the impact of cannabinoids on clinical outcomes remains uncertain.

Some studies have shown that cannabinoid exposure can reduce inflammation in the gastrointestinal tract. This can be attributed to changes in the microbiota, which regulates the immune system and afferent nerve terminals. Studies also show that microbial changes after cannabinoid treatment can lead to immunomodulation. Furthermore, fecal microbiota transplants have been reported to have an impact on clinical outcomes.

Inflammation is a complex process that occurs when pathogens or noxious stimuli are sensed in the periphery. Toll-like receptors play a critical role in macrophages sensing danger. By activating innate immune cells, cannabinoids may suppress the inflammatory response.